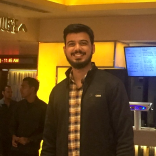 It takes, at least, a couple of films for any filmmaker to generate a fan base and become a brand. However, it took just one film for Jordan Peele to get all the acclaim any filmmaker dreams of. Us (2019) is the second Jordan Peele film after Get Out that is written, directed, and produced by him.

The story is about a family of four who go on a vacation to Santa Cruz and chill out in a vacation rental.

The father is played by M’Baku aka Winston Duke, from Black Panther. Nakia aka Lupita Nyong’o, also from the same Marvel film, plays the mother.

The family barely gets to enjoy a day of travel as they get intimidated by another family of four, who turn out their evil doppelgangers.

What happens next? How does all of this happen in the first place? Do they make it back alive, or not? Rush to the nearest theater to find out.

With Us, Peele has affirmed that Get Out was no fluke. He embodies a distinctive voice and perception towards the horror genre.

Just the way he permeated relevant themes of oppression and racism in his previous film, he has done something similar with Us, which also transcends the genre and showcases a new form of storytelling.

From the trailer, the film may have seemed like a home invasion thriller but it’s so much more than that.

It’s part thriller, part slasher, and part horror-comedy. And it has even deeper subtext and meaningfulness than Get Out.

Since this is a spoiler-free review, I am refraining from underlining any mysteries of the film.

I will be doing a spoiler-review right after this one.

But before that, take note that a single-viewing won’t be enough to spot and decipher all the messages which Peele has ingrained in his masterfully written script.

Peele’s work as a writer is further aided by Michael Abel’s unnerving soundtrack that completely elevates the experience.

While tons of originality can be found in the cinematography, along with the use of CGI, it’s the horrific score which renders a greater degree of uniqueness to the narrative.

There are several scenes in the film that are so intense they scare the daylights out of you.

The apt rendition of the sound effects keep you on the edge of your seat.

And then there is Lupita Nyong’o. She totally kills it in both of her roles.

She’s proved her mettle many times before but after seeing her work in this film, you will feel sorry for her never having been fully exploited to her full potential.

She is the central character in the film and displays a variety of emotions.

The first confrontation between her good and bad characters is a standout as she delivers a chilling recitation.

I can’t imagine anyone else pulling off the role the way she did.

Recommended: The Ultimate Horro Movie List: How Many Have You Seen?

Similar things can be said about the rest of the cast.

Everyone had dual characters to play and all the actors did great.

Winston Duke plays a very different role here than he did in Black Panther. And he is very refreshing. He stays real and relatable. And his humor never feels forced, rather very natural.

The filmfilm, in fact, strikes an inordinate balance between intensity and humor. The comedy never feels injected in a way that feels out-of-place but always very organic.

This is the result of Jordan Peele’s assured writing and direction.

Evaluating his body of work, he will soon be categorized with filmmakers like Alfred Hitchcock and M. Night Shyamalan for churning out inventive, original thrillers. Because only good thrillers succeed in gripping the audience from the word go and Us does the same. Watch it as soon as you can. It’s very likely it will not last more than a week in India.